Raised in the Soviet brainwashing program known as the Red Room, Nadia van Dyne spent the first years of her life in training as a deadly elite assassin. After she escaped with the help of a Pym Particle sample, Nadia immigrated to the United States, where she built her own Wasp suit and joined the Avengers, using her powers to fight villains of any size!

Drawing on the same size-changing foundation as Ant-Man, Wasp nevertheless boasts her own unique strategies, preferring to set up the perfect strike and execute her plans flawlessly. This Hero Pack includes a 40-card pre-built deck featuring the Aggression aspect that’s ready to play right out of the pack, and whether you’re most excited to jump into action as Wasp or add new cards to your other heroes, you’ll find plenty to enjoy within this expansion. 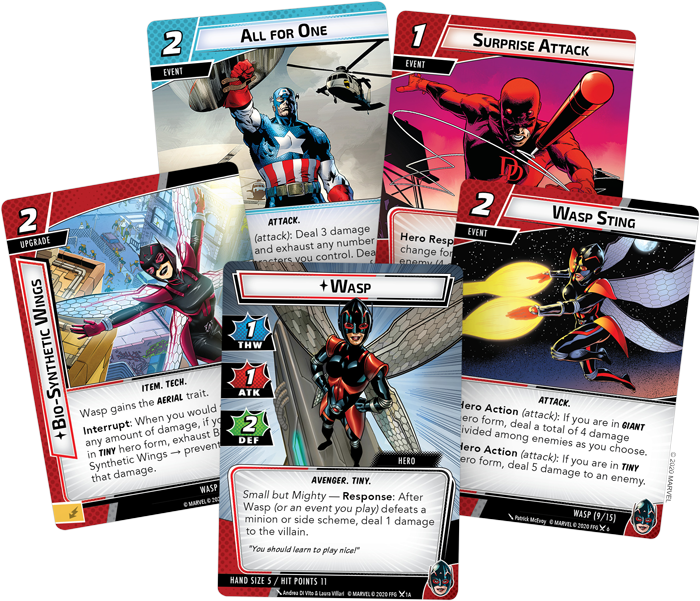 Just like Ant-Man in the Ant-Man Hero Pack, Wasp has a spectrum of size-changing powers at her disposal, and accordingly, she’s the second hero in Marvel Champions to boast two different hero forms: Tiny and Giant. With a hero card that unfolds to become a correspondingly giant-sized card, the Wasp can inspire your friends and intimidate the opposition in the game.

In her Tiny hero form, Wasp (Wasp, 1A) loves to deliver that perfect, pinpoint strike—whenever she defeats a minion or a side scheme, you can deal one damage to the villain, helping you to stack up damage even as you’re taking out the villain’s goons. You can use events to deliver the heavy hits and KO a minion or clear a side scheme, but Wasp’s base THW and ATK are relatively low. Fortunately, her Giant form (Wasp, 1C) is ideal for setting up your next turn. Whenever you attack or thwart with Giant Wasp, you can divide the damage dealt and threat removed between different enemies or schemes as you choose. Once you’ve lined everything up, you’ll be ready to flip to your Tiny hero form and clean up the mess!

And finally, when you need to heal up and recover, Nadia Van Dyne (Wasp, 1B) lets you shuffle cards with a mental resource back into your deck. Many of Wasp’s most powerful events feature the mental resource, including Giant Help (Wasp, 3) and Pinpoint Strike (Wasp, 4). These events are useful at any point, but if you’re in the right hero form—either Giant or Tiny—they become even more powerful and could make the difference between victory and defeat. 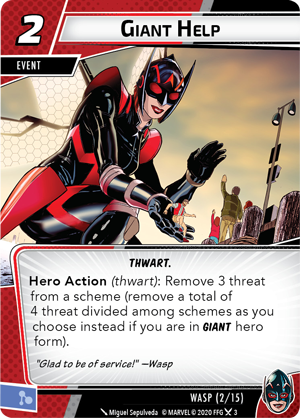 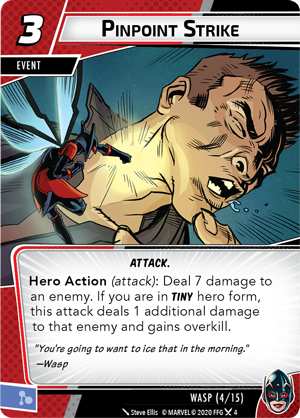 Wasp also boasts a card in her deck that features the new team-up keyword—a way to celebrate what two heroes can accomplish when working closely together. This card is Swarm Tactics (Wasp, 20), and a copy of it also appears in the Ant-Man Hero Pack. With the team-up keyword targeting Ant-Man and Wasp, you can only play this card if you can see both Ant-Man and Wasp on the table. Of course, one easy way to accomplish this is if both heroes are in play, but even if you’re playing with different heroes or playing solo, Wasp features Ant-Man as her signature ally, giving you a way to play Swarm Tactics in any game. Though it’s a little extra work to be able to play it, Swarm Tactics offers a powerful effect that’s well worth the coordination. 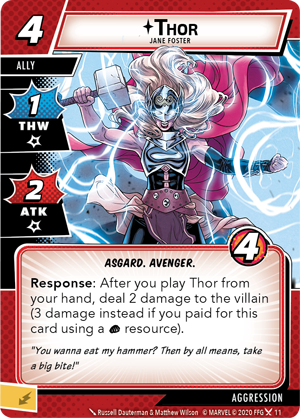 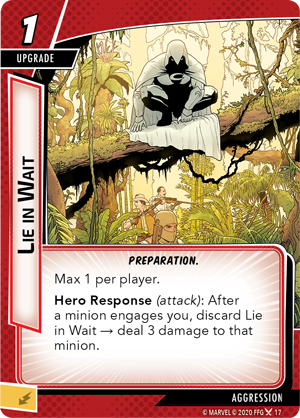 Wasp’s hero deck is stacked with powerful new Aggression cards that let you bring the pain to any villain. You’ll find Jane Foster making an appearance as Thor (Wasp, 11), a powerful ally who deals damage when she enters play on top of all the damage she can pump out in subsequent rounds. Surprise Attack (Wasp, 14), on the other hand, is an exceptional tool for either Ant-Man or Wasp, as it gives you a cheap way to deal damage after you change form. You’ll even find a new Aggression Preparation card that can synergize with Black Widow in the form of Lie in Wait  (Wasp, 17).