“I will have my revenge against Thanos!” – Drax

Killed by Thanos in a wicked act of cruelty, Arthur Douglas was reincarnated as Drax, a knife-wielding warrior with a thirst for vengeance. Now a member of the Guardians of the Galaxy, Drax travels far and wide, driven and determined to put an end to the mad titan once and for all.

As a member of the Guardians of the Galaxy, Drax charges into the scene with unrelenting fury in this expansion pack, which introduces Drax as a brand-new playable hero, along with his fifteen signature cards. With a pre-built Protection deck ready to go, you’ll be able to try out Drax’s unique vengeance-fueled gameplay from the moment you open the box. Punish the villains who wrong you and show them why Drax is a force to be reckoned with! 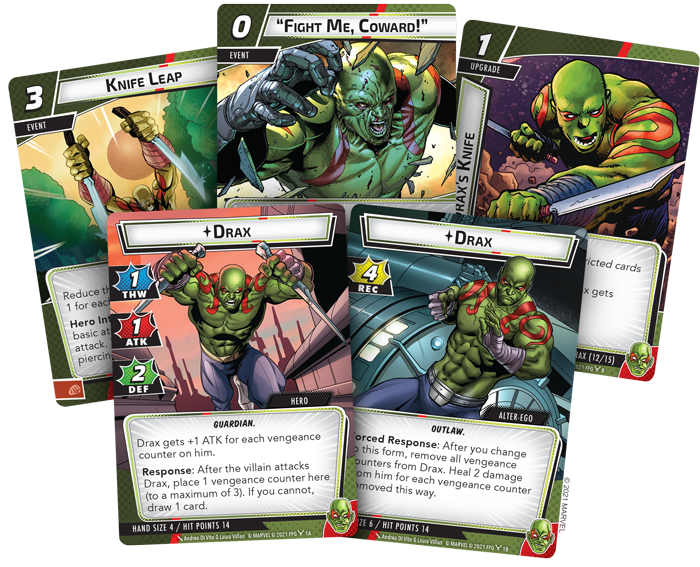 An Eye for an Eye

With a relentless thirst for revenge against Thanos and anyone else who stands in his way, Drax comes to the table ready to dish out as much of a beating as he takes. With high damage potential and borderline-absurd durability, Drax is a valuable combatant that is right at home in the front lines against the villain. 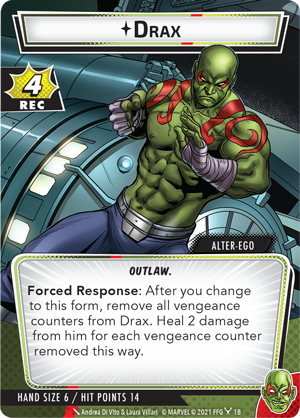 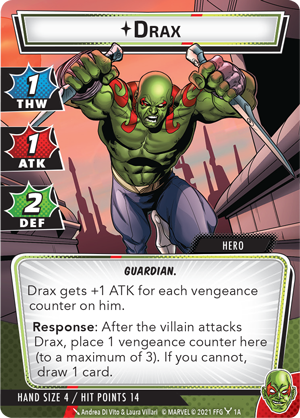 As a warrior fueled by vengeance, it’s only natural that Drax has several tools to punish the villain for attacking him. For starters, while in his hero form (Drax, 1A), Drax gains a vengeance counter each time a villain attacks him. His attacks get stronger and stronger for each vengeance counter he has, so use cards like "Fight Me, Coward!" (Drax, 3) to draw the enemy’s fire your way. You can even defend a fellow hero from a villain’s attack to gain vengeance counters even faster. Don’t worry about taking too much damage—with 14 hit points and cards like Subdue (Drax, 18) softening the villain’s blows, you can be sure that Drax will survive long enough to build up the power he needs to steamroll his enemies.

Once your ATK is good and boosted, it’s time to get some Payback (Drax, 7) on the villain! Use your Intimidation (Drax, 4) to stop the villain’s schemes in their tracks, then launch yourself at them with a devastating Knife Leap (Drax, 5). If you need just a bit more damage, then preempt that attack with a Leading Blow (Drax, 17)—with three vengeance counters, Drax’s attack will be more than high enough to still deal damage, allowing you to attack twice in one turn. 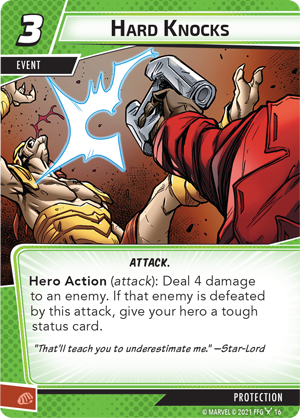 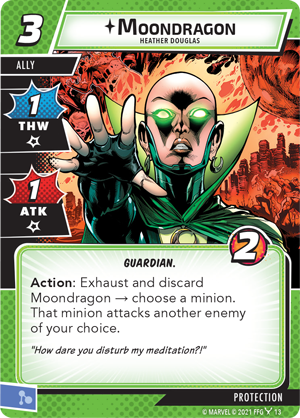 Eventually, even Drax needs to cool down. When you finally run out of steam, switch over to Drax’s alter-ego (Drax, 1B) form for a substantial heal. If you can’t afford to let the villain scheme, then take out a minion with Hard Knocks (Drax, 16) to grant yourself a tough status card instead. If there are a few too many minions for your liking, then call on the aid of Moondragon (Drax, 13) to make them fight each other. Or you could always have a minion attack the villain for some extra damage—that works too! After all, sometimes the best defense is an unrelenting offense.

Too Stubborn to Die

Drax’s powerful offense combined with his impressive durability makes him a potent warrior and a valuable member of the Guardians of the Galaxy. The Guardians arrive in Marvel Champions: The Card Game with The Galaxy’s Most Wanted, and with the Drax Hero Pack arriving in June, the team will be nearly complete.