The fastest man on Earth may have a checkered past, but Pietro Maximoff now uses his super speed to fight alongside the Avengers as Quicksilver. You’ll soon get the chance to test his speed for yourself: Fantasy Flight Games is proud to announce the Quicksilver Hero Pack for Marvel Champions: The Card Game!

There’s no one faster than Quicksilver, and he’s ready to race into your roster of heroes. Like every Marvel Champions Hero Pack, this expansion features a pre-built 40-card hero deck that’s ready to play right out of the box, featuring Quicksilver and the Protection aspect, along with a smattering of new cards for every other aspect in the game. Whether you’re playing as Quicksilver or using these cards to enhance another hero’s deck, you won’t want to let this Hero Pack pass you by! 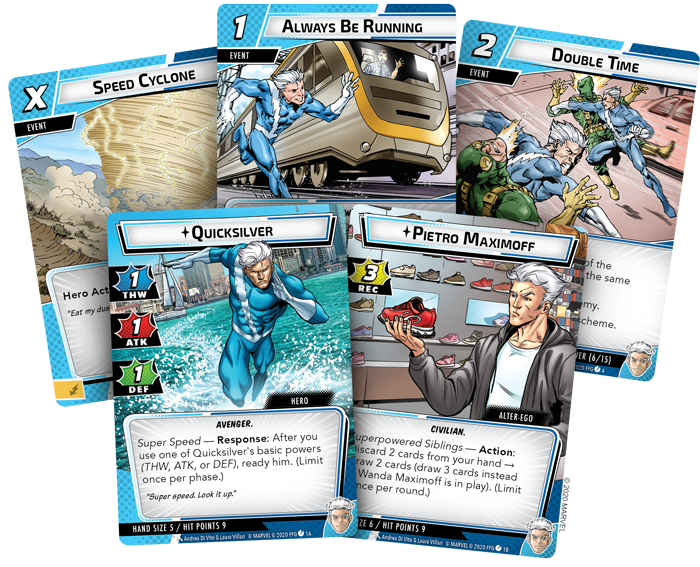 Quicksilver (Quicksilver, 1A) isn’t a hero who takes down the villain with a single punch. Rather, you’ll have to rely on your unconscionable speed to hit the villain over and over in quick succession. You’ll notice immediately that Quicksilver’s THW, ATK, and DEF all clock in at one, making his basic powers relatively weak—but he also boasts an ability shared by no other hero. With his Super Speed, you can immediately ready Quicksilver after you use one of his basic powers, and you can do this once per phase!

In other words, if you want Quicksilver to attack twice or thwart twice, he can certainly do that—but he also has the flexibility to both attack and thwart. And since Quicksilver can use his hero ability once per phase, he’ll always be able to defend against an enemy attack and ready again! With only nine hit points, you’ll need to spend some time recovering as Pietro Maximoff (Quicksilver, 1B), but when you do so, you’ll also be able to cycle your hand of cards to line up your next lightning-fast run. 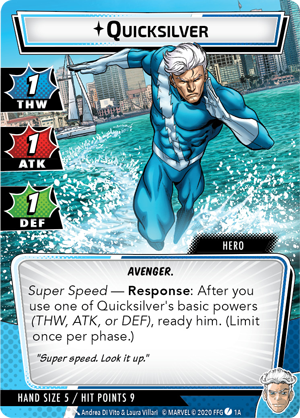 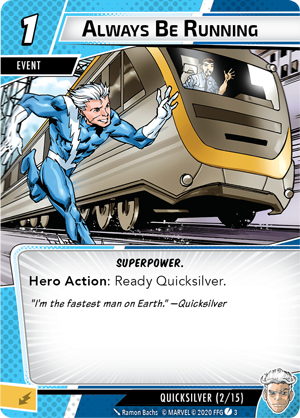 Few cards better exemplify a hero’s strategy than Always Be Running (Quicksilver, 3). You’ll find four copies of this event among Quicksilver’s signature cards, and it simply lets you ready Quicksilver and prepare him for action once again. So long as you have Always Be Running, you’re not limited to readying once per phase—and the only thing you need now is a way to boost Quicksilver’s stats to make every hit that much more potent. Cards like Reinforced Sinew (Quicksilver, 11) and Accelerated Reflex (Quicksilver, 8) make a good start, but once you hit Maximum Velocity (Quicksilver, 5), no villain will be able to stand in your way. Just make sure that you can ready enough times to make it count! 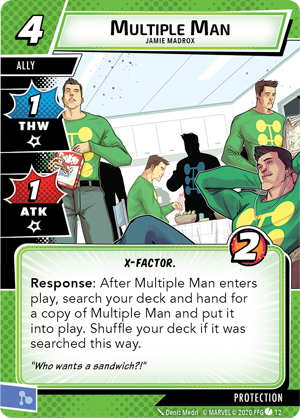 With his ability to always defend against an attack, there are few heroes who can mount a defense that matches Quicksilver—and when he’s paired with the Protection aspect, as in his pre-built deck, that defense becomes even stronger. You may start by giving him an Armored Vest (Quicksilver, 16) to raise his base DEF, and if it looks like a big attack is coming, you can always play Never Back Down (Quicksilver, 14). This event boosts your DEF even higher, and if you take no damage, you’ll stun the attacking enemy!

You’ll want some friends to help you defend incoming attacks or push your advantage during your turn… and what better friends to turn to than Multiple Man (Quicksilver, 12)! Arriving as the game’s first non-unique ally, you can include three copies of Multiple Man in your deck. Better yet, after one Multiple Man enters play, you can search your deck for the next and put it into play for free! Where there’s one Multiple Man, you can be certain that another one is just around the corner.